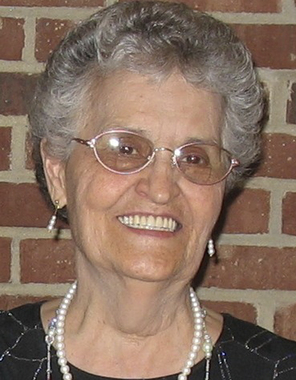 Back to Ella's story

Ella G. Newland, 92, of Columbus, passed away at 3:39 a.m., Friday, January 3, 2020 at Indiana Masonic Home in Franklin.
Ella Newland was born August 23, 1927 in Adair County Kentucky. One of eleven children, she was the daughter of Joseph Clayton Goodin and Amanda Clayborn Goodin, who preceded her in death on September 11, 1959 and June 28, 1974 respectively. She was also preceded in death by brothers Leonard, Stanley, Carey, Wesley, and Joseph Jr. Goodin; sisters Anna Lou Goodin, Delta (Goodin) Stargel and Reba (Goodin) McIlwain.
She married Wm. Howard Newland on February 15, 1947 and he preceded her in death on May 17, 1982. He was the love of her life.
She worked at Columbus Regional Hospital in the dietary department from 1966 until 1984 when she retired. She was a member of Memorial Baptist Church and was a longtime volunteer for Our Hospice of South Central Indiana. She also volunteered with the Breakfast Optimist Club and was a member of the American Legion and VFW.
Ella is survived by her children, Patricia Gastineau (Glen) of Columbus, Sue Fawbush (Jeff) of New Palestine, Wm David Newland (Faith) of Hartsville, Deb Cummings (Johnny) of Biltmore Lake, NC, and Mollie Wills (Steve) of Columbus.
She is also survived by sisters Margaret Marie Miller of Leesburg, VA and Juanita Warren of Columbia, KY, eleven grandchildren, twenty-one great grandchildren, three great, great grandchildren and a host of nieces, nephews, cousins and friends.
The funeral will be conducted at 11:00 a.m. Wednesday, January 8, 2020 at Barkes, Weaver & Glick Funeral Home on Washington Street with Pastor Jon Porter officiating. Visitation will be held on Tuesday from 5:00 p.m. until 8:00 p.m. and Wednesday from 10:00 a.m. until the time of service at the funeral home.
Burial will be at Garland Brook Cemetery.
Memorial contributions may be made to Our Hospice of South Central Indiana or Memorial Baptist Church.
Online condolences and special memories may be shared with Ella's family and a video tribute may be viewed at barkesweverglick.com.
Published on January 3, 2020
To send flowers to the family of Ella G. Newland, please visit Tribute Store.

Send flowers
in memory of Ella

A place to share condolences and memories.
The guestbook expires on April 02, 2020.