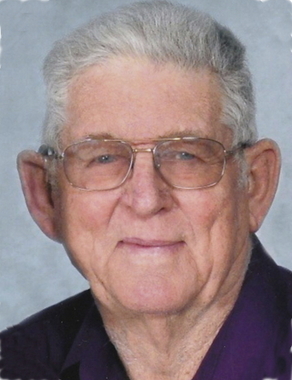 Back to Elmer's story

Elmer F. Raver, 86, of Oldenburg, died Monday, April 11, 2016, at Christ Hospital in Cincinnati. Born July 30, 1929, in Franklin County, he was the son of Eleanor (Harmeyer) and Walter Raver.
He married Anna Mae Vogel April 15, 1967, at St. Joseph's Church in North Vernon. Elmer served in the US Army during the Korean War and after the service came home to farm. He also drove a school bus for 15 years for the Batesville Schools.
Elmer was a long-time member of the Franklin County Farmers Mutual Company, serving as president for 20 years. He was also a long-time board member of the Farmers & Merchants State Bank in Oldenburg and the Rush-Shelby County REMC, Holy Family Church, the Knights of St. John's Commandry #220 in Oldenburg, as well as a life member of both the Batesville V.F.W. Post #3183 and the Prell-Bland American Legion Post #271.
If you didn't know Elmer, it was only because he hadn't met you yet. He liked talking with people and would strike up a conversation with anyone he'd meet. He also loved to read. He would read the paper from front to back in addition to enjoying non-fiction.
According to his family, he had no use for tractors that weren't Farmalls or vehicles that weren't Chryslers. They also indicated he had a weakness for cherry pie and could entertain you with stories from his childhood and his time in the service. Elmer was also proud to support the St. Labre Indian School in Montana and looked forward to the newsletters so he could keep up with their progress.
He is survived by his wife, Anna Mae; daughters, Diane Raver of Batesville, Elaine Spaulding of Indianapolis, Theresa Williams of Greensburg, Monica Livers of Oldenburg, Mary Mulcahy of Evansville; sons, Carl of Oldenburg, Joe of Batesville; sisters, Mary Jane Klene of Indianapolis, Charlene Reidenbach of Brookville; twenty-two grandchildren and three great-grandchildren.
Visitation will be from 4 to 7 p.m. on Thursday, April 14 at Weigel Funeral Home. Funeral Services begin at 10 a.m. on Friday, April 15 at Holy Family Church with Rev. David Kobak O.F.M. officiating. Burial will follow in the church cemetery with military rites conducted by the Batesville V.F.W. and the Prell-Bland American Legion.
The family requests memorials to Oldenburg Academy or the Margaret Mary Health Foundation.
Published on April 13, 2016
To plant a tree in memory of Elmer F. Raver, 86, please visit Tribute Store.

Plant a tree in memory
of Elmer

A place to share condolences and memories.
The guestbook expires on July 12, 2016.