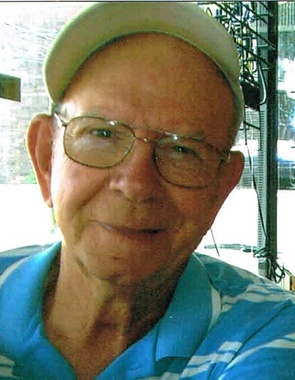 Back to James's story

James J. Blankman, 88, Greensburg, Indiana, passed away on Sunday, February 2, 2020 at the Aspen Place Health Campus in Greensburg.
Born October 11, 1931in Greensburg, he was the son of Bernard and Clara (Hardebeck) Blankman.
He graduated from Napoleon High School and then served in the Army as a Staff Sergeant during the Korean War. After his return from the military, Jim worked in the food industry and he retired from the IGA.
He was a member of the St. Mary's Catholic Church and a member of the Knights of St. John for more than 50 years. Jim oversaw the Knights of St. John hall rental for several years. He loved spending time with his family, playing cards, fishing, following the Cincinnati Reds, helping his neighbors with yard work, going to the casinos, and he had a strong devotion to the Blessed Mother.
Jim was married to Ruth A. Scheidler on October 23, 1954 and she preceded him in death on October 27, 2015.
He is survived by two sons, Bob (Carol) Blankman, Greensburg, Don (Jennifer) Blankman, Greensburg; two daughters, Mary (Rick) Harmeyer, Brookville, Linda (David) Fry, Greensburg; seven grandchildren, Kevin Wallpe, Kristin (Dustin) Rowland, Lisa Blankman, Chris Blankman, Megan Blankman, Michael Blankman, David Blankman; three great grandchildren, Brooks, Caroline, and Grace Rowland; one sister, Rita Mae Waechter, Muncie, IN.
He was preceded in death by his parents, wife; five brothers, Paul, Cyril, Alvin, Orville, and Francis Blankman; four sisters, Mildred Moeller, Dorothy Witkemper, Laura Gentry, Rosemary Schroeder.
Visitation will be from 4-7:00 p.m. Thursday, February 6, 2020 at the Porter-Oliger-Pearson Funeral Home in Greensburg. A public rosary service will be held on Thursday at 3:30 p.m. Visitation will also be held on Friday, February 7, 2020 at the St. Mary's Catholic Church in Greensburg from 9-10:00 a.m. followed by the funeral Mass at 10:00 a.m. with Rev. John Meyer officiating.
Interment will be held in the St. Mary's Catholic Cemetery with military graveside services.
Memorials may be made to the Our Hospice of South Central Indiana or to the St. Mary's Church Building Fund.
Online condolences can be made to the family at www.popfuneralhome.com
Published on February 3, 2020
To send flowers to the family of James J. Blankman, please visit Tribute Store.

Send flowers
in memory of James

A place to share condolences and memories.
The guestbook expires on May 03, 2020.

Carol (Waechter) Turner
So many wonderful memories! Rest in Heavenly Peace Uncle Jim.
Madelyn Ferris
Dear Bob and family: so sorry on the loss of your Dad. Thinking of you during this time. Blessings.
Marybeth Schroeder Siemens
Dear Cousins,
I am so sorry to hear of your dad's passing. I have fond memories of him and your mom as I was growing up. Take comfort knowing he made a positive impact on so many people. Blessings to you all.
Ernest Zaugg
Very Sorry.
My Condolences!
View all