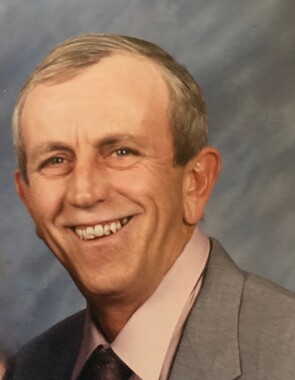 Back to Max's story

Max L. Johnson, 75, of Greensburg passed away on February 13, 2020. He was born on February 11, 1945 in Lebanon, Indiana, the son of Marion and Mary Johnson. Max was a 1963 graduate of Sandusky High School. He married Doris Witkemper on February 24, 1968, and together they had three children: Amy, Vicki, and Scott. Max was a member of the Knights of Columbus, Fraternal Order of Eagles,
and St. Catherine of Siena Parish. He was a farmer and then a truck driver for Batesville Casket for 25 years. Max was an avid Purdue Boilermaker fan who enjoyed playing golf, fishing, caring for his lawn and garden, watching old westerns, and listening to Cincinnati Reds games on the radio. A man who never met a stranger or forgot a name, he was known and loved by many.
Survivors include: Wife, Doris Johnson of Greensburg; Daughters, Amy (Jason) Satkoski of Carmel and Vicki (Craig) Center of Seattle, WA; Son, Scott (Laura) Johnson of Greensburg; Sisters, Janet (Jerry) Owen of Mooresville, Donna Bostic of Phoenix, AZ, and Nancy (Tim) Nelson of Hobart; Brother, Marvin (Anne) Johnson of Camano Island, WA; Grandchildren, Kelsey Johnson, Ashley Center, Zach Johnson, Rylee Satkoski, Brennan Satkoski, Parker Satkoski, and Cayden Satkoski. He was preceded in death by his parents.
A Rosary will be prayed on Monday, February 17, 2020 at 3:00 pm. A visitation for family and friends will follow from 4:00 pm to 7:00 pm at the Gilliland-Howe Funeral Home, Greensburg, Indiana. Funeral Mass will be Tuesday, February 18, 2020 at the St. Maurice Catholic Church, 1963 North St. John Street, Greensburg, Indiana 47240, at 11:00 am with Father Bill Ehalt officiating. Burial will follow at the St. Maurice Catholic Cemetery. Memorial contributions can be made to the American Diabetes Association or to the National Kidney Foundation. Online condolences can be made to the family at www.gilliland-howe.com
Published on February 14, 2020
To send flowers to the family of Max Johnson, please visit Tribute Store.

Send flowers
in memory of Max

A place to share condolences and memories.
The guestbook expires on May 14, 2020.

Blue Caribbean was purchased for the family of Max Johnson by John Beery.  Send flowers

Linda Amberger
Sorry about your loss Doris. I will always remember Max beautiful smile an hearty laugh. He was so pleasant in church. We will miss him at our St Catherine church family. Our deepest sympathy sn prayers to you an your family. Linda an Jerry Amberger
Elizabeth white-davis
My condolences scott..... my prayers are with you!!
Ruth Wright (Sweezey!
My thoughts and prayers go out to all the family! Remembering when we went to St. Louis in the sixties! God bless you all!
Richard & Dorothy Mahan
Friends of parents, Marion & Mary Johnson with special memories (Dorothy was in Loyal Neighbors Homemakers Club with Mary for many years.)

A memorial tree was planted in memory of Max Johnson.  Plant a tree

Janet Owen
There are so many memories, but right now I am thinking about my brother bringing his new bride to meet me in North Carolina. Jerry was on a cruise with the military and I couldn't come to Indiana to the wedding. Love you both for your kindness to me.
View all