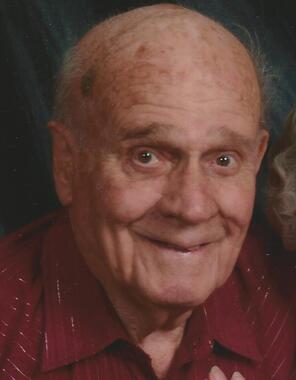 Back to Robert's story

Robert John "Bob" Schreiner, 94, of Shelbyville passed away Sunday, April 21, 2019 at his home.
He was born February 15, 1925, in Indianapolis, the son of Ralph and Esther (Mabee) Schreiner. In 1945, he married Virginia Connors, and she preceded him in death in 1976. He married Norma J. (Brancamp) Kreinhop on October 8, 1977, and she survives.
In addition to Norma, Bob is survived by his son, Michael J. Schreiner and wife, Brenda, of Shelbyville; daughter, Diane Seitz and husband, Larry, of Switz City; grandchildren, Christopher Schreiner and wife, Melissa, Heather Bounds and husband, Dan, Marcus Seitz, and Tammy Sturgeon and husband, Doug; and several nieces and nephews.
He was also preceded in death by his parents; and sister, Barbara Bowers.
Bob was a U.S. Navy veteran, serving during World War II and the Korean War.
He was a member of St. Joseph Catholic Church.
Bob was a plumber with Union Local No. 440 in Indianapolis, from 1950 to 1987.
He was also a member of the Veterans of Foreign Wars in St. James City, Florida, and Eagles Aerie Lodge No. 766 and Moose Lodge No. 2118.
Bob enjoyed fishing and hunting. He also enjoyed dancing with Norma.
Visitation will be from 4 to 7 p.m. Thursday, April 25, 2019 at Freeman Family Funeral Homes and Crematory, Carmony-Ewing Chapel, 819 S. Harrison St. in Shelbyville, with the rosary recited at 3:30 p.m.
A Mass of Christian Burial will be at 10 a.m. Friday, April 26, 2019 at St. Joseph Catholic Church, 125 E. Broadway St. in Shelbyville, with Fathers Bill Ernstes and Mike Keucher officiating.
Interment will be at Greenlawn Cemetery in Nashville, Indiana.
Memorial contributions may be made to the Cancer Association of Shelby County, PO Box 844, Shelbyville, Indiana 46176, the Alzheimer's Association, Greater Indiana Chapter, 50 E. 91st St., Suite 100, Indianapolis, Indiana 46240 or the American Diabetes Association, 8604 Alisonville Road, Suite 140, Indianapolis, Indiana 46250.
Online condolences may be shared with Bob's family at www.freemanfamilyfuneralhomes.com.
Published on April 22, 2019
To plant a tree in memory of Robert John Schreiner, please visit Tribute Store.

Plant a tree in memory
of Robert

A place to share condolences and memories.
The guestbook expires on July 21, 2019.